This route is extremely pleasant by bicycle, see the google map reference below and can be combined with Figueres, lunch - there are lots of good restaurants in this area, or wine tasting in Garrigüella, Vilajüiga, or another Emporda bodega. Or a quick dip in the sea and a fish supper...For more spritely types, Empuria Brava is the place for 'night life' (i don't remember what that is exactly, but discos are involved). 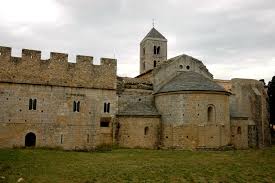 Information about this site before arriving is a closely guarded secret, but once you are in situ, a useful leaflet will find its way into your hands - in English, if there are any left...
There is also a little walk around the village - the leaflet in catalan can be downloaded - here it is to give you an idea. Presumably it is available in English once you've paid up! 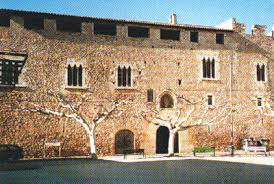 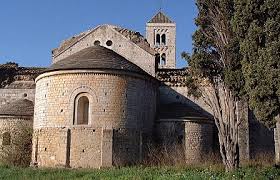 http://www.mhcat.net/content/download/9382/73194/file/Vilabertran%2C+itineraris.pdf
The point is that it is a very pleasant visit on your route.

C/ Abadia, 4
17760 Vilabertran (Alt Empordà)
Tel.: 972508787
e-mail: vilabertran.cultura@gencat.cat This link has a nice introduction to the monastery, in English.
http://capcreus.com/vilabertran/vilabertran_uk.htm

Peralada
It is just 7 km from Figueres and 40 km from Girona. Here is a useful link for more information about the medieval village:
http://capcreus.com/peralada/peralada_uk.htm


About 500 AC, a group from the Iberian tribe of indiketes built what would be the first walled village of Peralada.Transformed into the centre of a country from the Carolingian Empire in the 9th Century, Peralada became one of the main capitals of l'Empordà throughout the Medieval Age. From this bright period there are still many buildings and monuments left which make the delights of the visitor who discovers the secrets of a millennial village. 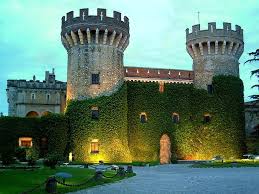 Still, most people only ever see Peralada on a warm summer's evening, dressed to the nine's en route to a concert in the castle grounds during the annual festival. And some don't go to the concert but stay in the casino or the al fresco dining terrace! The village is well worth seeing however, during the day, combined with other medieval villages.

Castle Museum of Peralada - here is what they say about themselves:

In Peralada the visitor has the opportunity to visit one of the most spectacular, private collections of Catalonia; the Castle's Museum, which is located inside the antique Carme's convent.The cloister and the Gothic church are two of the convent's original dependencies that can be visited. A library with around 80.000 volumes and more than 1000 editions of El Quijote is another appeal of this visit, which follows with the Glass Museum, with on of the best and biggest collections of the world. And, eventually, the Wine's Museum, which was created in the 60's in the wine cellar where until that date Peralada's wines were produced. All the elements and objects exposed are from the wine's culture in any of its phases.

Cloister of Sant Domènec
This 12th century Romanesque monument is the sole vestige that remains of an old Augustinian convent. In 1578 it became the headquarters of the Dominicans.Worth noting in the cloister are the lowered arches, a feature that belongs to a later period, and the sculptures on the capitals of the columns with plant motifs and zoomorphic figures.

Medieval walls
The town of Perelada had had two walled enclosures. There are still a few remains of the
ancient reduced fortification in the Carrer Sota Muralla, in the Carrer de les Monges and the Plaça de Sant
Domènec. You can see important fragments of the wall from the second fortification in El Carme convent. From 1000-1285 AD, Perelada was one of the main towns in the Empordà.
Fire destroyed much of the town in 1285. 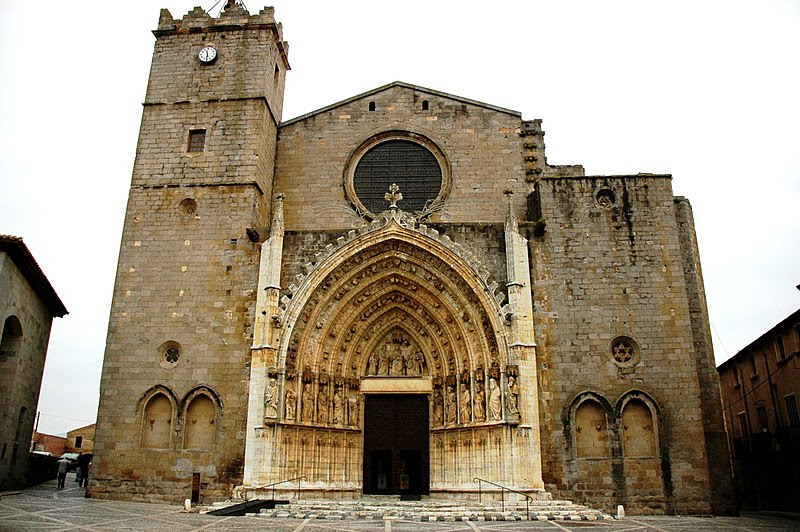 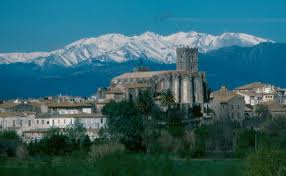 Cycle route Vilabertran and Figueres villages
This is a route we did by road bike in April last year and thoroughly enjoyed - we were lucky with the wind! Highly recommended and you can extend or cut short as you feel like - just be careful to take a good map, as you wouldn't think you could get lost but believe me, you can!
https://maps.google.es/maps?q=castello+d'empuries&ie=UTF-8&hq=&hnear=0x12ba61d9ab3cdd37:0x400fae021a467f0,Castell%C3%B3+d'Emp%C3%BAries,+Girona&gl=es&ei=1_OYUJy1IeiQ4gTCh4GAAw&ved=0CJ8BELYD 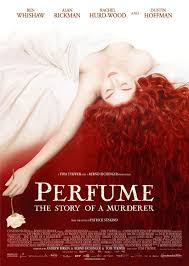 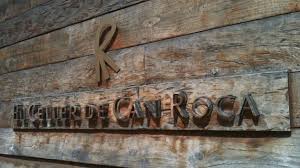 You don't need me to know about the Celler de Can Roca 3*, one of the best restaurants in the world at the moment, but perhaps you didn't know that the Roca brothers also have a restaurant called Numun in the Palau de Bellavista Hotel. The main advantage being, you might be able to get a table.Another pair of much-acclaimed related restaurants are Massana 1* and Nu, the first of 25 years standing and the second a new enterprise by Sr Massana and his wife. All of these restaurants are in walking distance from the apartment.
The Hotel Meliá (near, but not such a nice walk), also has a highly recommended restaurant, as does the Carlemany Hotel, with its' Pati Verd.
Cal Ros is not to be sneezed at either, having been around for donkeys years. 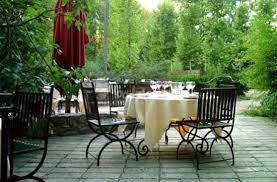 El Bistrot has to be seen because it's an institution in Girona but i wouldn't bother with the so-called rustic pizzas - you can eat that at home. You can just go for a coffee to see inside but it's pleasant for a slowish lunch and also if you're on your own. A rather romantic place is La Poma, though rather over-priced, for the hole in the wall that it is. Nearby is Vinil, more brash and with a terrace, but we had a perfectly acceptable meal. Blanc, is what they call here 'catering' (pronounced 'kattering'). The food is prepared off-site as far as i can tell, but it's a good place for lunch between museums or a, 'i'm too fagged out to bother much' evening meal. Some of the dishes are really good, others not so much, i like the atmosphere and the decor.
I haven't personal experience of the following new young things on the block but they look alright and have good reviews - Draps, La Calendula had great reviews, Curcuma, Thot and Arros i Peix. These last are 12-14 euros for a lunch, which is quite high so be demanding. Recently we tried Sarratoga just off c/Migdia again, near the apartment, and their 'menu' is about 11€ and the 3 courses were very acceptable, in a clean, efficient, friendly and relaxed atmosphere.

Where do we go? Summer evening on a terrace, Cull de la Lleona and Jardins de la Merce (you have to be patient....they have a bit of 'attitude' here, but equally, generosity - looking after friends' luggage for example, while we saw the sights). I previously recommended Mon Oncle, but they've lost the plot, too slow, too hippy by half, and that nice waitress isn't there anymore...

We like Can Manolos, Dali and Gala had their wedding reception here. La Font nearby used to be lovely outside in Summer, but we haven't been for too long to say what it's like now. La Bretonne is the best for a great salad and crêpe and Dolce Vita for a family spaghetti/pizza night. L'Arcada in the Rambla also used to be good for pasta and pizzas, upstairs. downstairs is tapas. La Boira in Plaça Independencia has a good restaurant upstairs and downstairs is a haven for a beer and tapas break after shopping and meeting up.
Not to be forgotten are the cocktail bars and restaurants in Pedret, which is a hike, so get a taxi. There's a night club there as well.
Gran Muralla, c/Francesc Eiximenis and C/ de la Creu near the apartment are the Chinese restaurants we know. Japanese restaurants are a bit of a let down in Girona, although the takeaway suchi near the apartment in c/Migdia, is good but pricey.
Cheap and cheerful

König is Girona's fast food chain, found near the cinema, in Plaça Independencia, Near Sant Felix/Feliu Church and near the apartment in C/Migdia. Hamburgers and hotdogs but also salads and sandwiches and the atmonsphere is much nicer than MacDonalds - more like a cafe with terrace. The original one is in c/Jaume I near the post office and has tables outside.
La Tagliatella is a pizza/pasta chain where the huge portions are used to justify the rather high prices, but it is tasty and speedy. It's in C/Santa Clara.
They also do a normal very cheap catalan lunch menu and you can sit and read the paper in peace (well, it's not exactly quiet, but you have to tune out). Just on the corner of Juli Garreta is Angelus, whose speciality is to serve half rations of a starter and a main on one plate! Bit strange, but quite good and the menu is varied. It's also a very popular cafe and place to plug in your wifi thingies... 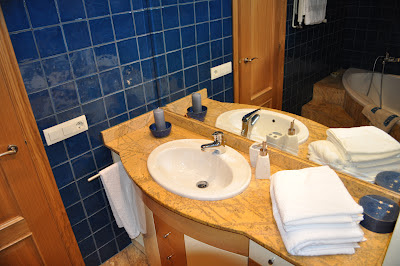 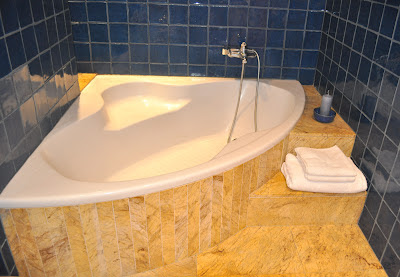 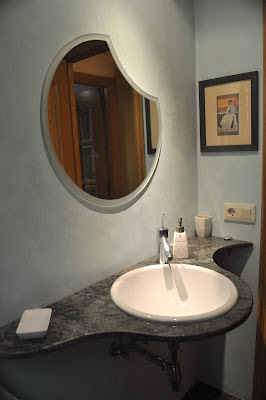 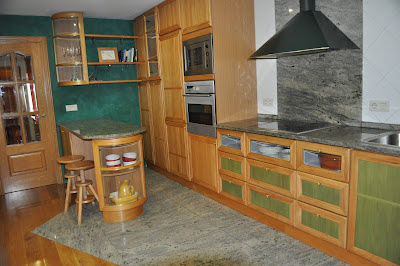 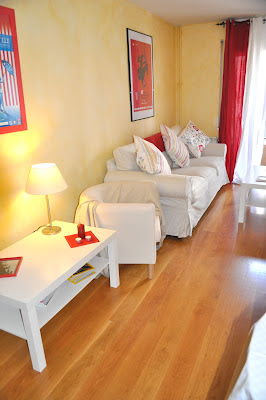 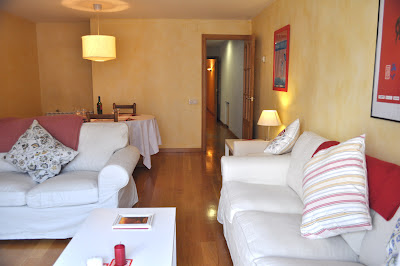 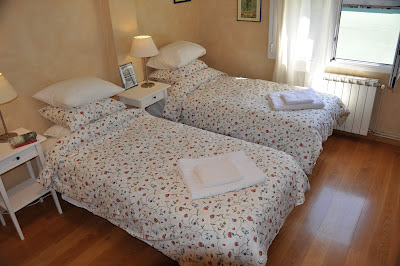 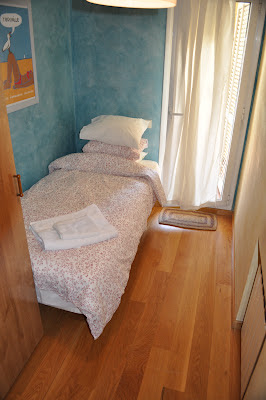 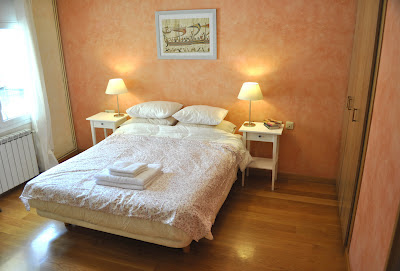 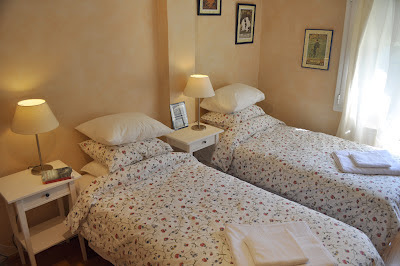 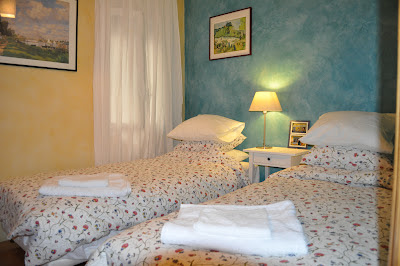 Thankyou for such a well equiped appartment!! We have felt right at home. (UK, August 2013)
Posted by liza Simpson Brown No comments: